In the summer of 2020, travel within Europe was very uncertain, so I jumped at my friend’s offer of a ride to the Dolomites (he was going there to climb).

I pretty much just read Cam Honan’s guide, downloaded a gpx track and then went for it.

I didn’t take a stove. 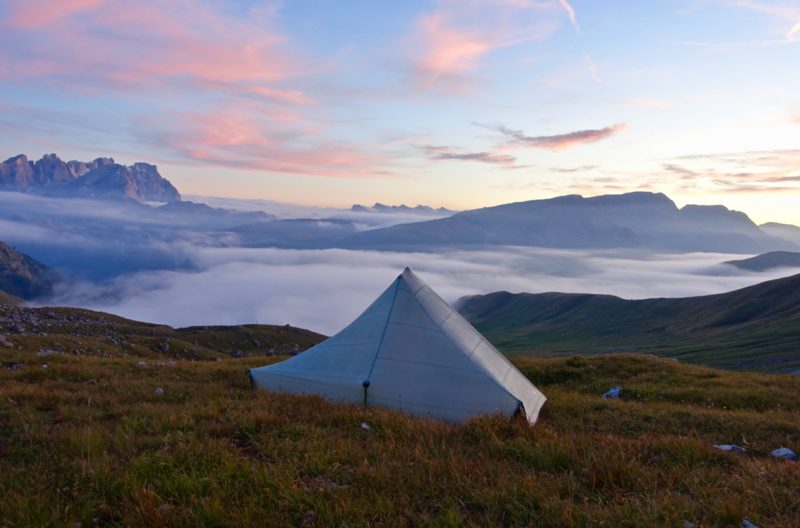 A Quick and Dirty Guide to the Alta Via 2 | The Hiking Life
The Dolomites boast an extensive system of pathways, and of the many trails that crisscross its rugged topography, arguably the most spectacular of them all is the Alta Via 2.

I was dropped off at the start of the trail at around 11am. The trail out of town is a very long and sustained hill climb. Never too steep, but relentless (from the town it’s a 1880m climb to the first high point).

I slept a few hours later just after the Peitlerkofel saddle, in the first good camping spot I could find (a slight dip a few metres above the trail and out of sight). I intended to cowboy camp, but after 30 minutes that clouds had rolled in and it was starting to drizzle, so I set up my tent. And it’s a good thing I did, a thunderstorm arrived in the night, I could really feel the thunder booming around me. I also gained a lot of confidence of the waterproofness of my tent floor. My body weight must have formed some kind of seal with the ground under me (I was on a slight incline), because at at some points in the night I could feel a huge bulge of water underneath me.

At multiple points I asked myself why I wasn’t in the hut about 500m away. I can’t remember the exact hut cost, but it was something totally reasonable (€20-30).

No special remarks, lots of nice scenery. Some great remote camping spots around km 29 (of the trail). Definitely reachable on day 1 if you start earlier.

There was another storm forecast for the night, so I opted to stay in the Rifugio Pisciadù even though it meant cutting my day a bit short. I’m never fully at my ease it huts, but it was nice to be warm and dry, and socialise with other hikers. I was surprised at how empty the hut was. My dorm had a capacity of maybe 12, and there were 3 of us. In August, in the Alps! Given the corona situation I guess I shouldn’t have been surprised.

Just after Rifugio Pisciadù was my favourite section of the whole route. An other worldly landscape of rock plateaus and spires.

The 2nd half of the day was less scenic, near roads, and walking down what I’m guessing must be ski runs in the winter, but in a rainy summer look a bit muddy and scrappy. When the clouds parted there were some very dramatic views of Marmolada. It’s the highest peak in the Dolomites at 3,343m and looks thoroughly impressive. I believe there’s a via ferrata route over it that I was considering, but given the weather conditions I faced, I’m glad I didn’t plan on it.

I was aiming to stay at the campsite at Malga Ciapela, but when I got there it was closed. I think there was some bad flooding the year before (or maybe it was earlier that year?). I ended up in a local hotel (due to another bad weather forecast).

Malga Ciapela was my one resupply stop on the route. I carried most of my food from the start, but purchased a few things here to see me through the last few days.

Immediately upon leaving Malga Ciapela I faced a big problem. A bridge was missing, and the torrent was too wide and strong for me to cross. If I really had to, it might work, but I was scared. The rain had started again. I was planning out how best to cross safely, when I noticed a digger doing some repair work in the stream further down. A few minutes later, the driver was heading upstream against the current. When he saw me, he recognised my predicament. He stopped and manoeuvred the arm of the digger so that the scoop rested on my side. He indicated to it and I clambered in. He then deftly lifted me across. I bowed my thanks and headed on my way.

Towards the end of the day there was a rough scramble up and over a col. It was a mix of via ferrata, but mostly steep loose scree. There was also quite a bit of fresh snow from the recent storms. At the end of a long day it was fairly arduous. I was however rewarded with my favourite campsite of the route, in a large flat basin below Refugio Rosetta.

Some very steep climbs and descents, but nice weather. The second climb of the day out of Passo Cereda was particularly slow. I think at the top I was probably going at >1km/h. The whole day was only 30km, but at 11-12 hours of hiking, it felt like a lot more.

I stayed in Bivacco Feltre-Bodo, which consists of two free shelters. The mattresses and blankets looked very well used, but you wouldn’t find me complaining, I thought it was paradise. I had the smaller building (2 bunk beds) to myself.

I decided to finish my day at 1pm so that I could stay in Refugio Giorgio Dal Piaz. I think it cost less than €20, which was much cheaper than anything I’d be able to find in town. I was also not in a huge rush as I still wasn’t meeting my friend for a few days.

The refugio has no water source, so I bought a 1.5L bottle and lay in my bed reading. I finished Burmese Days by George Orwell and Started Catch 22 by Joseph Heller, both great books. In the evening I ate a 2 person pizza to celebrate the end of my hike. I was the only person in my 13 bed dorm. It was modern and clean, and was one of the nicest dorms I’ve stayed in.

I’d paid the night before so I could leave early. I love hiking in the morning. This day was just winding down the hill into town. I arrived in Feltre at about 10am and spent the next 2 hours marvelling at the buildings in the old city. 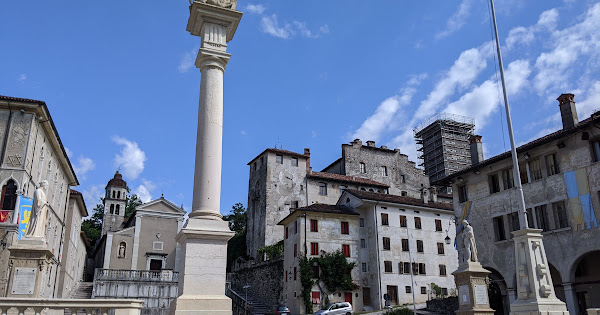