At the end of June 2020 I was living in Konstanz (Germany) and the border with Switzerland had been closed for around 3 months. As soon as it looked like I could visit again, I planned on doing a section of the Via Alpina. Basically seeing where I’d get to in 6 days. After looking at the distances, I felt like Grindelwald was a realistic target, and the foot of the Eiger made for a poetic ending. As a side note, I always prefer when a trip has a sense of romance to it. As in the case of the PCT; walking from Mexico to Canada feels more meaningful than a journey of the same length with arbitrary start and end points.

Switzerland doesn’t exactly have a reputation of friendliness towards wild campers. However, as with most places in the world, if you setup out of sight or at dusk, leave early and follow leave-no-trace principles, you’re unlikely to be disturbed. I’ve yet to have anyone say anything. Perhaps some farmers wouldn’t like it, but other Swiss hikers I’ve met on the trail haven’t batted an eye when asking where I sleep.

In my few days on the trail I was always able to find somewhere appropriate to camp. Usually the best places were just before or after passes.

In late June the weather was a mixed bag. It rained most nights, with a couple of storms. I only had one truly rainy day and I treated myself to a night in a cheap (by Swiss standards) hotel. Most days were sunny and warm and I would spend half an hour each morning reading a book and laying out my tent and sleeping bag to dry.

I’d brought some microspikes (traction devices for my shoes) with me, but didn’t really need them. There was one pass with some hard snow that I needed to cross where I did put them on, but it would have been doable without them.

I didn’t know what to expect with regards to ruggedness of the route. Besides a few steep descents, the trail is generally very easy going. I don’t remember and scrambling or sections needing to be secured with ropes or chains.

Nothing new or surprising here. I took my TarpTent ProTrail, and my short foam mat. I did take a small stove (a brs-3000 weighing 25g) and having hot food was appreciated on the cold evenings as I waited to set up my tent. I did also take my kindle, which was a luxury I don’t usually allow myself. 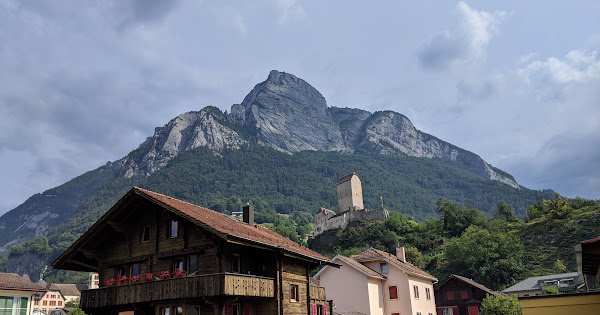 Via Alpina
Sargans to Grindelwald