Dylan (the guy who put the route together, possibly with the help of the friends he started with) has already collected so much information on the route, and many resources are available at his website. This made things much easier for me.

Any estimate for a trip like this requires a large pinch of salt, but thanks to the existing resources, I think I have as good an estimate as I’m ever likely to get.

The original team for this trail started on the 20th of April (I believe). Based on my experiences walking in the mountains, I thought this seemed like a good time, so I aimed to start mid to late April. Due to flight times and prices, I ended up booking a flight to Varna for the 22nd of April. I’ll then take a couple of days to settle in, see the sights and purchase my initial food. I plan to sleep at the start of the trail on the 24th, then I will begin hiking in the morning, on April 25th.

On his website, Dylan provides a very useful resupply spreadsheet. This contains the planned resupply stops along the route, as well as the distances between them. It also has cells where you can input your estimated km/day for a given section. Not only does this calculate how many days food you need to buy at any given resupply stop, by putting all of these times together it also calculates a fairly good estimate for the duration of the whole trail.

Here is a link to my version of the resupply spreadsheet: 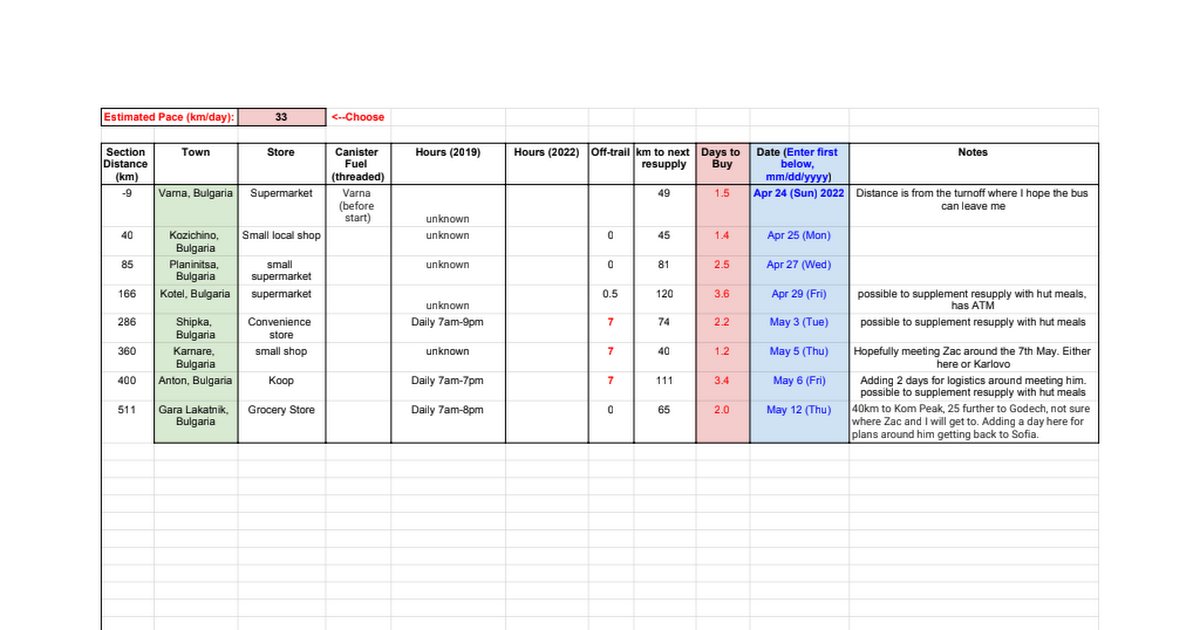 In the past I have almost always underestimated how far I will walk on average per day. I still think having a conservative estimate is generally better, however this time I thought I’d try and guess a little more accurately.

For reference, here are some paces for previous hikes:

Here are my estimated paces for the various sections of the TEAR:

Given these estimated paces, and a few contingency days for rest and logistics thrown in, my current guess is finishing in late October, or around 6 months.

I made an overview table of the countries I’ll be passing through, including distance in that country, languages spoken and whether it’s in the EU or not. This has helped me identify which languages are likely to be most useful, as well as giving me a better idea of the trail as a whole.

From what I can tell I won’t need any special visas for my trip. Travel within the EU/Schengen area will effectively be covered by my German residency permit. I think it’s only officially valid for 3 months travel in other Schengen countries (other than Germany), but in practice I don’t think this is controlled, especially if I take the train back to Germany at the end of the hike.

I won’t be in any of the Balkan countries long enough to require anything more than a tourist visa. One caveat is that the trail’s main route crosses into Montenegro in the mountains, and not at a manned border crossing. For this I need to apply for a special permit. If for whatever reason that ends up being a problem, I can always take an alternative route to go through an official border crossing.

My German sim card will cover me for EU countries, but that still leaves two significant gaps. The first and largest is from leaving Bulgaria (in the EU) until Croatia (the next country in the EU), which will be >1000km, or just over a month. An acquaintance in N. Macedonia told me that the “Western Balkan Countries” (which cover all of those I travel through) signed an agreement last year to provide phone plans that cover the whole region. My plan upon entering Serbia is to take a train to the next larger town (Pirot) where I can hopefully arrange a prepaid sim card for the Western Balkans. I imagine there’ll be a lot of fun communication to sort this out. Who knows, maybe the phone shop assistant will be young and speak English, but that might not be quite as memorable.

The next gap is in Switzerland, which I’ll be in for 385km, or just under 2 weeks. From speaking to a friend who lives in Switzerland, it seems that he can add an eSim to his phone plan for 1 month, which I should be able to activate on my phone remotely.